Biography
She was born Hildegarde Loretta Sell in Adell, Wisconsin, and raised in New Holstein, Wisconsin, as a Roman Catholic in a family of German extraction. Sell trained at Marquette University's College of Music in the 1920s. She wore elegant gowns and long gloves. ''Miss Piggy stole the gloves idea from me'' she once said. A noted flirt, she told risqu anecdotes while giving long stemmed roses to men in her audience. During one performance she waltzed with a United States Senator. Her recordings sold in the hundreds of thousands. She is credited with starting a single name vogue among entertainers. Investments and work in ads for a bottled-water company, barley vitamins and bathtub device gave her a comfortable income through the rock era.

Vaudeville
She worked in vaudeville and traveling shows throughout her career, appearing across the United States and Europe. She was known for 70 years as The Incomparable Hildegarde, a title bestowed on her by columnist Walter Winchell. She was also nicknamed ''The First Lady of the Supper Clubs'' by Eleanor Roosevelt. She was once referred to as a ''luscious, hazel eyed Milwaukee blonde who sings the way Garbo looks''. During the peak of her popularity in the 1930s and 1940s, she was booked in cabarets and supper clubs at least 45 weeks a year. Her recordings sold in the hundreds of thousands, and her admirers ranged from soldiers during World War II to King Gustaf VI Adolph of Sweden and the Duke of Windsor.

Hildegarde lipstick
She appeared on the cover of Life in 1939, and Revlon introduced a Hildegarde shade of lipstick and nail polish. She was an inspiration for Liberace, who once acknowledged her influence on his performances: Hildegarde was perhaps the most famous supper club entertainer who ever lived. I used to absorb all the things she was doing, all the showmanship she created. It was marvelous to watch her, wearing elegant gowns, surrounded with roses and playing with white gloves on. They used to literally roll out the red carpet for her.

Television
From the 1950s through the 1970s, in addition to her cabaret performances and record albums, she appeared in a number of television specials and toured with the national company of the Stephen Sondheim musical Follies. She appeared as the Celebrity Mystery Guest on ''What's My Line?'' on May 8, 1955.

Autobiography
Hildegarde never married although she was quoted as saying ''I traveled all my life, met a lot of men, had a lot of romances, but it never worked out. It was always 'hello and goodbye'.'' She was the business partner and good friend of Anna Sosenko whom she met at the beginning of her career. That relationship ended up in litigation over the control of receipts from their joint efforts. Her autobiography, ''Over 50... So What!'', was published by Doubleday in 1961. She died at the age of 99 in a hospital in Manhattan on July 29, 2005 of natural causes. 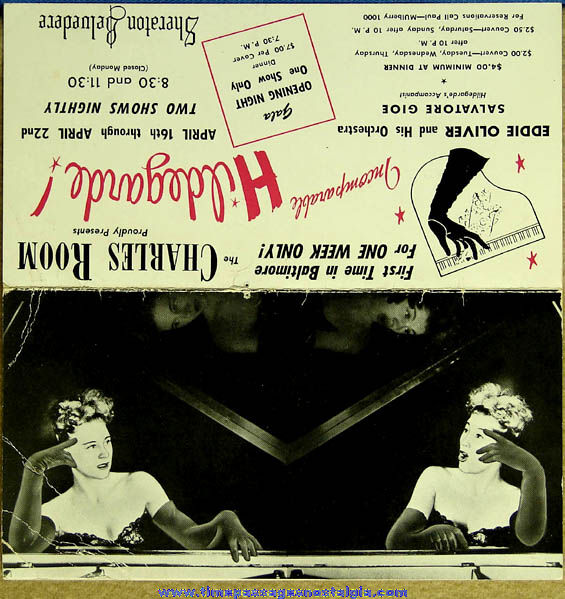 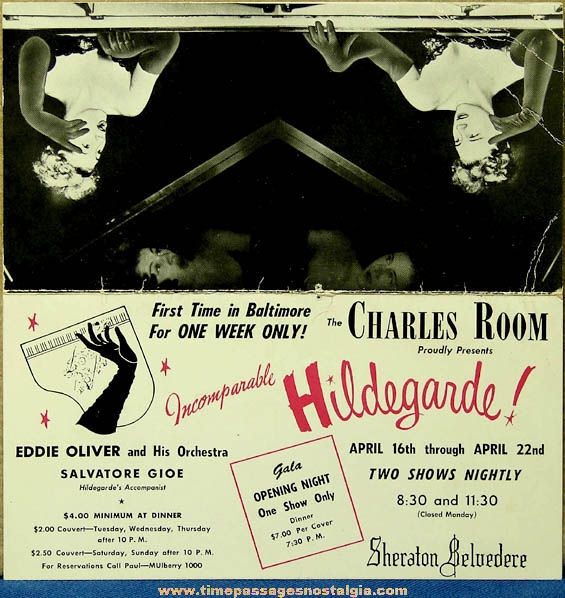