Service history
Kamehameha was built by the Mare Island Naval Shipyard in Vallejo, California. Upon completion she went on her first sea trials, off the coast of California. Missile firing tests at Cape Canaveral, Florida, followed, after which she sailed to Pearl Harbor, Hawaii, which was her home port until 1970. Although Pearl Harbor was her home port, she made all of her Pacific patrols out of Apra Harbor, Guam, in order to permit maximum time on patrol station with minimum transit time to and from port. Maximum time on patrol is also the reason why every ballistic missile submarine has two crews, dubbed Blue and Gold. Early in 1966, Kamehameha joined the United States Pacific Fleet, and the Blue Crew began her first deterrent patrol on 6 August 1966. After this patrol in November 1966, the Gold Crew relieved the Blue Crew, and Kam was soon underway again. It was on her last Pacific patrol that the Blue Crew took her to the Pacific Missile Test Range to fire two dummy warhead missiles. The Blue Crew then took Kam into port at Pearl Harbor in preparation for transfer to the Atlantic Fleet.

The Gold Crew relieved the Blue Crew, and spent the next few weeks in Honolulu giving the people of Hawaii the opportunity to go aboard and see the submarine named in honor of the King of Hawaii. In early June 1970, with the Gold Crew operating the boat, Kam got underway for Charleston, South Carolina, via the Panama Canal, for duty with Submarine Squadron 18, based at Charleston. The submerged transit to the canal took about seven days, and upon arrival off the coast of Panama, Kam surfaced and was met by the Panama Canal pilot who would take her through. The passage through the Panama Canal was given priority by the Canal authorities, and little time was spent waiting to enter. The boat was the object of considerable curiosity from those on ships nearby, and from the onlookers ashore. Once clear of the canal, Kam again submerged and began the final leg of the transit, passing through the Caribbean and out into the Atlantic.

Kam surfaced just east of the Charleston harbor sea buoy, and waited for the tug that was to bring Miss Charleston on board. The information about Miss Charleston was contained in Commander Submarine Squadron 18s message of instructions for Kams arrival, and had caused a bit of excitement among the bachelor junior officers. As it happened, both the Officer of the Deck, a lieutenant, and the Junior Officer of the Deck, were bachelors, so they both were expectantly scanning the channel. Suddenly, one of the lookouts reported a Navy tug just appearing in the distance. All binoculars were trained on the tug, and the OOD reported, I see a female standing on the bow! Thirty seconds later, with some measure of disgust in his voice, he then reported, Captain, thats not Miss Charleston, thats your wife! This news left the captain the only happy man on the bridge. The remark was relayed to a reporter who also had arrived on the tug, and the next day, in the Charleston newspaper, the Society page bore the headline, That's Not Miss Charleston, Thats the Captains Wife! It seems Miss Charleston had gone to the wrong pier in the shipyard and thus literally missed the boat.

Shortly after Kams arrival, and still under the Gold Crew, she was ordered to sail on patrol earlier than scheduled in order to fill in for another boat that had suffered a casualty to the main engines. Kam exchanged all 16 missiles in less than 24 hours, and also replaced the ships battery. She then took Commander Submarine Flotilla Six, a rear admiral, on board and proceeded to sea for four days of sea trials, thus giving ComSubFlotSix the opportunity to see just what this new addition to the Atlantic Fleet was like. In the event, Kam passed with flying colors and embarked on her first Atlantic Fleet deterrent patrol. She made two more patrols, one Blue and one Gold, and in April 1971, was taken by the Blue Crew into the shipyard for major overhaul, including refitting for the newer Poseidon missile system, and refueling of the reactor. On 31 May 1971, the Gold Crew was disbanded for the duration of the overhaul.

History needed for 1971 - 1992.
Between 1974 and 1978 she belonged to Submarine Group 2, Squadron 16; homeported in New London, Connecticut, and advance based in Rota, Spain. She conducted nuclear deterrent patrols in the Atlantic and vicinity without incident in 1975 and 1976. During September - November 1976, Kamehameha spent time in Charleston, South Carolina, conducting SPECOPS with other units, then onto the AUTEC range for qualifications prior to resuming patrol duties after her return to Rota.

The Kam entered Portsmouth Naval Shipyard (PNSY) in 1981 for a non-refueling overhaul. She finished sea trials in late 1982 and worked its way from Groton, Connecticut, to Port Canaveral, Florida, and then to Charleston for its complement of missiles. She then transferred to Holy Loch, Scotland, for patrols out of Dunoon. There she completed patrols 50 - 58?? During the late 1980s, Kamehameha completed a refueling overhaul at Portsmouth Naval Shipyard in Kittery, Maine. Following completion, she transferred to Groton in December 1989 for recertification inspections and training. During this period, the Gold Crew launched the last Poseidon C-3 (inert) from missile tube No. 4 off Port Canaveral, Florida. Following certification, she returned to deterrent patrol operations in November 1990 and returned to Holy Loch, Scotland. In August 1991, with the deactivation of the Poseidon missile system, the Kam transferred from Holy Loch to Groton, and performed non-deterrent patrol operations until July 1992 when she left for conversion. Her radio callsign during this period was NKAM. For much of her operational career, Kamehameha was based at Rota, Spain.

Conversion to attack submarine
In September 1992 through July 1993, at Mare Island Naval Shipyard in Vallejo, California, Kamehameha was converted to a Dry Deck Shelter / swimmer delivery platform, reclassified as an attack submarine, and given hull number SSN-642; her ballistic missile capability was removed and thereafter she carried only torpedoes as armament. Henceforth there was only one crew, and her subsequent missions included SEAL special warfare operations. Following conversion, the Kam transferred to Pearl Harbor, Hawaii, for the remainder of her operational career.

Decommissioning and disposal
Kamehameha was decommissioned on 2 April 2002 and stricken from the Naval Vessel Register the same day. She was the last of the original 41 for Freedom fleet ballistic missile submarines in service, and the oldest submarine in the United States Navy at the time of her decommissioning. The wardroom of the oldest submarine in the fleet carried Richard OKanes personal cribbage board, and upon the Kamehamehas decommissioning the board was transferred to the next oldest boat, the U.S.S. Parche (SSN-683). She holds the record for the longest service lifetime of any nuclear submarine, nearly 37 years. Kamehamehas scrapping via the Nuclear Powered Ship and Submarine Recycling Program at Bremerton, Washington, began in October 2002 and was completed on 28 February 2003.

Commemoration
Kamehamehas sail with fairwater planes, the upper half of her rudder, her bust of King Kamehameha I, a koa plate, bow, and spear, and the wardroom monkeypod wood table are stored at Pearl Harbor, Hawaii. Her periscopes have been donated to the Deterrent Park on Submarine Base Bangor, Washington, to become part of the U.S.S. Woodrow Wilson (SSBN-624) exhibit. 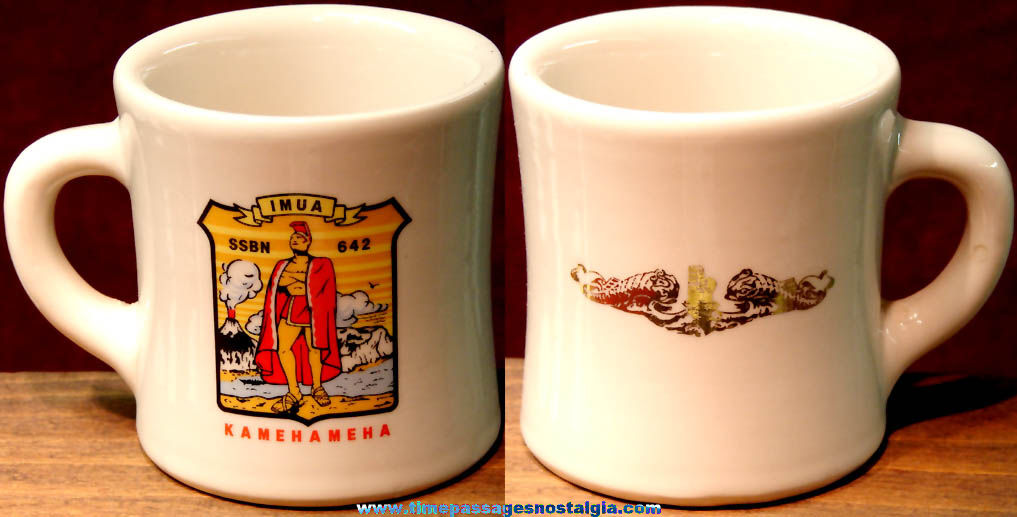