Mike Tyson vs. Donovan Ruddock II, billed as ''The Rematch'', was a professional boxing match contested on June 28, 1991.

Background
Three months earlier, Tyson and Ruddock, who were boxing's number one and two ranked heavyweights respectively, had fought each other to determine who would next face the Undisputed Heavyweight Champion Evander Holyfield. Mike Tyson was awarded the victory via a controversial 7th round technical knockout. After Tyson hit Ruddock with a six punch combination, referee Richard Steele stepped in and stopped the fight despite the fact the Ruddock had not been knocked down and appeared to be healthy enough to continue. The decision caused an uproar which resulted in Ruddock's brother and manager, Delroy and his promoter, Murad Muhammad getting into a physical confrontation with Tyson's trainer Richie Giachetti while Steele had to be escorted to the back by Mirage security for his safety. After much demand, promoters Don King and Murad Muhammad announced on March 27 that a rematch would in fact happen. However, shortly after the announcement was made, the rematch was canceled after Muhammad was given a one year suspension by the Nevada Athletic Commission for his role in the post fight brawl and Ruddock pulled out of the match, refusing to participate without his promoter. Nevertheless, Muhammad announced that the fight was back on 10 days later. Prior to the fight, the two men publicly expressed their dislike for one another. At a press conference before the fight, Tyson would infamously state that he would make Ruddock his ''girlfriend''.

The Fight
In a hard fought match that went the distance, Tyson ultimately picked up the victory via unanimous decision with all three judges ruling in his favor with one score of 113 - 109 and two scores of 114 - 108. Tyson got off to a strong start in round 1. With 16 seconds left in the round, Tyson staggered Ruddock with a right hook to the side of his head, causing Ruddock to hold on to Tyson to prevent taking any more damage. After the bell rang, Tyson threw two punches at Ruddock, who in turn would respond with a powerful right hand that just missed connecting with Tyson. Referee Mills Lane would warn the two fighters between rounds that he would deduct points should punches be thrown after the bell. Tyson would continue to attack Ruddock in round 2, hitting him with another strong right hand in the round's opening seconds. Later in the round, Tyson would hit Ruddock with a 3 punch combination as Ruddock was against the ropes, though one of the punches was below the belt, causing Lane to separate the two and issue a warning to Tyson. After Lane's warning, Tyson would hit Ruddock with a strong right overhand that knocked Ruddock to the canvas. Ruddock would almost immediately get back up but was met with a furious onslaught from Tyson, who continued to hammer Ruddock with punches until fatigue set in with about 30 seconds left in the round. Ruddock would bounce back with a strong round 3, but in round 4, Tyson would counter a Ruddock uppercut and land a right hook that again sent Ruddock to canvas, though Ruddock was again able to quickly get back to his feet. Tyson would also have the first of three points deducted in round 4 after once again landing a low blow on Ruddock. Tyson would also lose points in both the 9th and 10th rounds for hitting Ruddock with another low blow and hitting him after the bell, while Ruddock would lose a point in the 8th for hitting Tyson after the bell. In round 11, the two fighters would exchange low blows, but Lane opted not to deduct points, instead warning the two to ''knock that shit off''. In round 12, Tyson would fight Ruddock aggressively in an attempt to gain the knockout victory, but Ruddock was able to withstand Tyson's attack and survive the fight without any further knockdowns. By the end of the fight, Ruddock's left eye had been swollen shut and his jaw had been broken, while Tyson suffered a perforated eardrum.

Aftermath
After months of tough negotiations between Tyson's and Evander Holyfield's respective camps, which included both men's promoters attempting to get a fight with George Foreman instead, a deal was reached that would see Holyfield and Tyson face each other for the Undisputed Heavyweight Championship on November 8, 1991 at Caesers Palace. However, Tyson suffered an injury during training camp and was unable to fight in November. The parties waited to reschedule until after Tyson's trial was complete, but before the fight could take place, Tyson was convicted of the rape of Desiree Washington in February of 1992 and sentenced to six years in prison.
Meanwhile, Ruddock would bounce back from his two losses to Tyson with knockout victories over Greg Page and Phil Jackson. This would set up a match with Lennox Lewis for the right to face the winner of the Evander Holyfield - Riddick Bowe fight for the Undisputed Heavyweight Championship. Ruddock would end up being knocked out by Lewis in the 2nd round, costing him a chance at the title and effectively ending his status as one boxing's premier heavyweights. 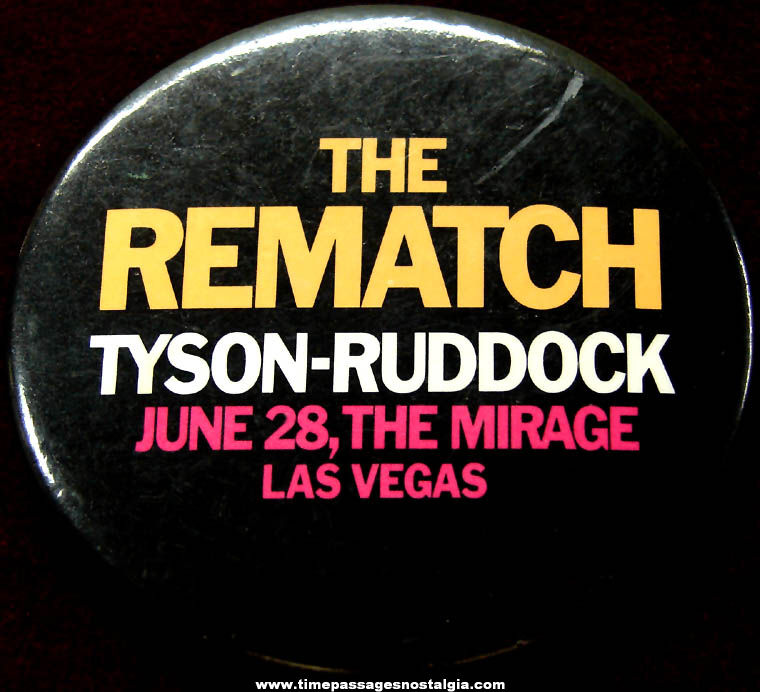